Production: 9.5 – Production shines as the best in today’s music.

Musicianship: 9.5 – A more enticing and powerful voice may not be heard in today’s music. 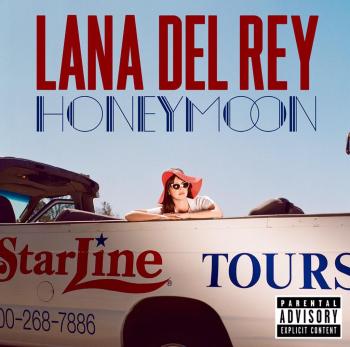 2012 saw pop music change. Despite releasing an album previous to the juggernaut that is Born To Die, Lana Del Rey burst onto the pop scene with the vision of doing things a bit differently. She didn’t cater to the 3 minute verse chorus repeat and repeat humdrum pattern that has plagued the pop culture. She hasn’t masked her talent in shades of auto-tune and drowning beats. Her voice is the reason for the music, and her lyrics are the reason for the journey.

Fast-forward three years to today, Lana has released her fourth album – Honeymoon, and it is stunning and brave. Following the trend she’s since the last album, Ultraviolence, Honeymoon is further stripped than its predecessor. Where Ultraviolence featured reduced percussion and sound effects, Honeymoon often relies the distant company of a piano, strings and acoustic guitar.

Beginning with the self-titled track, “Honeymoon” starts Lana’s greatest musical and vocal achievement so far. It’s somber, it’s sad, it’s classic Lana Del Rey – at least in lyrical fashion. Musically, it’s the most stripped down song in her career. The nearly six minute track is driven almost solely by her vocals. The chorus features the statement, “Our honeymoon, say you want me too, dark blue.” It’s a song open to interpretation like many others, but it allows the listener to make the song their own. “Honeymoon” begins the album on an intimate and personal note that tells everyone, this isn’t just another pop artist album seeking the top 100.

“Music To Watch Boys To” continues the stripped theme but does feature some percussion, strings, piano and flute. Production shines on this song because it’s relaxing and laid back while also seeming to be upbeat enough to be a single for the radio.

Lana Del Rey’s music has been described as a myriad of genres, but one that has stuck out is 50’s – 60’s lounge music. It’s a genre only occupied by Lana, and it creates an image that’s hard to forget. When I heard “Terrance Loves You” for the first time, I saw a smoky bar set back a few decades and Lana standing next to an old piano singing for the cast of Mad Men. The chorus is angelic to the point that it melts away the world around you until you’ve entered her realm. It’s a beautiful song invoking emotion when she sings, “I lost myself when I lost you”

“God Knows I Tried,” follows a similar path without seeming like a remake and has a revealing lyric: “I’ve got nothing much to live for ever since I found my fame.”

“High By The Beach” is a single that is already a favorite off the album. It’s poppy and fun. Unfortunately it takes me out of the trance the rest of Honeymoon has put on me. I don’t knock it for anything, it’s just not for me.

“Freak” is a perfect example of how Lana has changed the formula for today’s pop music. Entrancing vocal melodies in the verse that travel up and down the scale, and a chorus that gets stuck in your head and not because it has a simple and dumbed down elementary beat. “Freak” gives the middle of the album strength and substance.

Building off the shoulders of “Freak” is “Art Deco.” It’s a vocal triumph not for sheer range, but in songwriting. The melody in the verses demand attention as she hits each note flawlessly. The two songs prove that Honeymoon isn’t just a few good songs, it’s an album of ambient music.

“Religion” and “The Blackest Day” showcase Lana’s clear talent and beautiful songwriting. On the adverse, “Salvatore” is amiss and brings the album down.

Lana Del Rey has silenced the critics and masses who said that her major-label debut Born To Die couldn’t be beat. Without saying one is better than the other, Honeymoon is simply but a near masterpiece of songwriting and beauty. It’s an album more than worth buying on vinyl and spinning in the evening while drinking a fine wine.